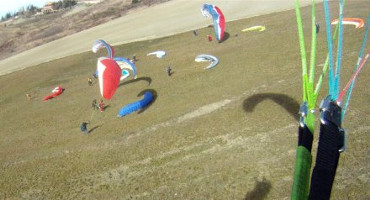 The Chairman thanked Arne Hillestad and the Norwegian Federation for hosting this meeting and took the opportunity to welcome Ane Pedersen from the host nation,
and two new members attending from France, Jean-Pierre Pouleau, the new FFVL President,
as well as Claude Bredat, their new Safety Officer.

Actions from previous minutes.
European Qualification Framework.
Andre Bizot reported that due to work pressure he had been unable to allocate any time to this task. It has been put on hold at this time.

Karl gave a presentation showing that the European Online Accident Database is now complete. It is held on one server.
Each Federation can now utilise it. There will be a one off charge of 300 Euros.
The link to the EHPU database is:-
http//ead.com195-42-121-15evivalhosting.de
Karl reported that this is all legal from the Confidential Data viewpoint.
However each Federation needs I Frame installed on their own national Website.
Karl also reported that it will be available in all languages, and that the statistical tool will be added in the next couple of weeks.
Nationally several things must be in place:-

1. An online accident reporting system.
2. If more than one report comes in regarding the same accident the National Safety Officer must edit them into one incident.

The chairman congratulated Karl for the considerable work he had put in, and also said that everyone should use it as soon as possible in order to get it up and running.
Adjustments, modifications etc. can be carried out later and must not be a reason to delay its introduction.
Any proposals for improvement, such as France’s request to include a human factor and a flights/year field and Dave’s comment regarding wind speed should be sent direct to karl@dhv.de and hannes.lohrmann@evival.net

a) Hang glider suspension systems. Variations are appearing.
Should there not be an EN standard?

b) PG harnesses-
1) Back protection. DHV are working with Graz University to establish the most suitable impact protective material. Current harnesses do not provide
sufficient side or bottom protection. They hope to have results to present to EN Standards meeting of WG6 in the Autumn.

2) Pod (cocoon) type harnesses are still vulnerable to being launched with leg-loops unsecured. Manufacturers are producing a variety of designs in an attempt to resolve this issue. Perhaps an EN standard could be introduced.

3) Reserve deployment under G forces. The increasing use of the G-Force trainers (There are now 4 in regular use) is identifying severe problems with some systems when attempting to deploy under the sort of G force experienced when in a locked-in spiral.
We would recommend WG 6 look into this problem and consider including this parameter in testing for reserve deployment.

c) Helmets
An increase in the use of helmets with long tails again raises the likelihood
of neck twist injuries.
We feel that EN966 should reflect this issue.

4 FLYING PRACTISES.
Speed gliders
As expected, the use of small paragliders, sometimes called speed gliders, sometimes mini-gliders or sub 20 gliders, which were initially intended for fast gliding descents, are becoming widely used for soaring in winds that would be too strong for standard sized paragliders.
This has led to a need to clarify the two activities in order to ensure that all pilots using these gliders for soaring, i.e. normal paragliding but in strong winds MUST be trained as paraglider pilots. This is to ensure that they are aware of Rules of the Air, flying site practises etc.
In Switzerland they do not differentiate between the two activities. They have decided that ALL pilots must be qualified as paraglider pilots.

B. TRAINING
1. FAI IPPI SYSTEM
Raymond gave a brief review of his work on his Safepro update for CIVL.
A suggestion was made by Jens Voetmann, Denmark, that level 3 trainees
be considered as Pilots rather than students. Raymond will look at this.
The proposal is to be be considered by CIVL Hg. Committee for approval.
He reported that Igor Ertzen has similar update plans for Parapro.
The IPPI card system provides evidence of a pilot’s qualification level regardless of his national association’s system and is a valuable tool for the sport now that pilots travel to fly in Countries other than their own.
2. ASSOCIATION OF PARAGLIDING PILOTS AND INSTRUCTORS. (APPI)
The website used by this organisation has been designed to appear official in order to attract members, but APPI is not recognised either by FAI or EHPU.
Their comparison with FAI and IPPI is incorrect, and they have no right to the use of the FAI logo. We feel that EHPU should take this further.

a) For 2013 and 2014 the entire document is only “advisory”, and from 2015 only section A, Pilot skills will be mandatory. Therefore it would appear that Section B, Pilot Experience will continue to be only “Advisory”.
So should Annex 19F not be entitled THE PILOT SKILLS DECLARATION FORM?

b) It was suggested that the sole purpose of this document could be seen purely as protection from Insurance claims, and served no other real function.

2) WORLD PARAGLIDING SERIES (www.race2goal.net)
This has been set in place by Mads Syndergaard, a Danish competition pilot who has strenuously opposed the current decisions taken by CIVL regarding
the use of certified gliders only. His aim is to organise competitions outside the control of any governing body. We believe his intentions are misguided, and hope they do not prove to be disastrous.

3) THE NEW CIVL-EN COMPETITION CLASS PROPOSAL
The suggestion that in-flight tests be done at trim speed appears to be in conflict with EN test methods.
Quote: “The CECC speed limit is set at 65km/h and manufacturers will test at this speed and check the glider behaviour. Repeatedly testing at full speed is needlessly exposing the test pilots to danger”, so the “tests will be carried out at trim speed”.
But competition gliders spend most of their time at full speed, not at trim speed so it seems to be strange logic.
It is difficult to see that this would be acceptable to either WG6 or EN.
Who wants to fly a wing that top test pilots don’t want to fly?!!

CIVL’s hope to have a new EN-competition class glider certified by 2015 is hardly likely to reach fruition due to the time scales involved.
Therefore it seems that the ban on the use of uncertified gliders will remain in place for some time to come. The BHPA still hold the view that the ban should remain in place until a suitable alternative is available.

ESTC also propose to cease using the term “serial gliders”, and only describe “certified gliders” as such.

D. ANY OTHER BUSINESS
1) PARAGLIDING CERTIFICATION DATABASE
This is being looked into by Rodolfo Saccani. He said he would like to see videos made available of the test manoeuvres being carried out, but Karl said that this would not be possible due to legal reasons.
2) FUNDING
As several ESTC members indicated that their failure to attend this meeting in Oslo was due to tight budget finances, a request was made as follows:-
To investigate the possibility of EHPU providing some funding for meetings.
3) NEXT MEETING
The next meeting will take place in Nice, France, on 14th/15th June 2014.
However it was suggested that, in order to minimise costs, a regular meeting location be sought rather than the current rotation system.