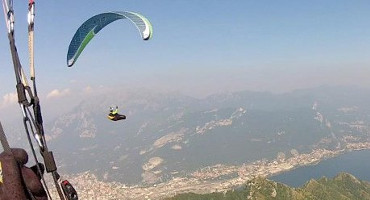 The chairman welcomed the two Representatives from Hungary who were attending the meeting
for the first time.
He also welcomed Joel Yout from ENSA, the Ecole Nationale de Ski et d’Alpinisme of France

Karl Slezak reported on progress with the new German LTF (Airworthiness directives).
The “round table” (DHV, EAPR, PMA) has sent a common proposal for the new LTF to the LBA (German Civil Aviation Authority). This proposal contains the EN 926-1, 926-2 and additional working instructions, to make the testing of manoeuvres like symmetric/asymmetric collapse, spiral, more precise. In comparison to the original EN-Norm, there are also more precise instructions for the documentation of the tests.
In order to have one common test standard, the next goal is to convince EN WG 6 to adopt the additional working instructions and formally incorporate them into EN 926-1 and 926-2.
Karl explained that a test house must hold the LBA-Certification in order to certify gliders which are dedicated for the use in Germany.

Karl made the suggestion that we should consider asking manufacturers to make a clear statement
in the manual whether or not an EN-B paraglider is suitable for Students and Schools.

ALTHOUGH OF GREAT INTEREST TO THIS COMMITTEE, BOTH THE ABOVE ISSUES REGARDING
TESTING AND CERTIFICATION ARE SPECIFIC TO THE EHPU AIRWORTHINESS COMMITTEE.

The Chairman reminded everyone that every participating Country MUST ensure that their
National Organisation Website offers a link to their Flying and Safety Rules page, (sometimes
called “Visiting Pilots” page.

Ulrich Ruegger of ActiveFly demonstrated the updated version of his Paragliding Flight Simulator.
This equipment is intended to enable students to experience flight when entering and leaving thermals.
The programme gives the pilot a panoramic view simulating flight in a mountainous region.
The harness in which the student is seated pitches backwards, forwards and sideways in synchronisation with the picture movement he sees in front of him, and at the same time the pilot experiences realistic forces on the control handles. This simulates the movement of the glider above the pilot’s head. By using the control handles correctly he can quickly learn to “dampen” the simulated oscillation
of the glider. All this in the safety of the classroom.

The general view of the Committee was that this simulator is extremely realistic and a useful
and practical tool for teaching students the canopy control skills required when flying in
thermic conditions, without exposing them to the associated dangers.

The French Government would like to make a comparison of the different training systems and
skill levels of Instructors in each Nation represented by EHPU.
This issue has been brought about by concerns raised by the Safety Organiser in Annecy regarding doubts about the skills level of visiting groups led by foreign instructors running SIV courses.
It was for this reason that Joel Yout had been invited by Marion to address the meeting.
Marion stressed that this was not an attempt to unify Instructor skills or examinations, as each Nation has different skill levels required, often based on the topography of their specific Country.
Also the issue was raised regarding the ongoing re-assessment of qualified instructors, for example
Hungary requires an annual check.
In order to pursue this subject, ENSA have agreed to host a meeting in Chamonix on the weekend November 14/15th. Anyone within our National Associations who is dedicated to Pilot Training would be most welcome.
ENSA and FFVL have very kindly offered to finance this meeting with delegates only having to meet travel costs.

Marion reported that there is evidence in France that pilots sometimes experience “The Grey Curtain” when caught in a deep spiral.
This phenomenon leaves them partially conscious, and unable to carry out the normal physical
movements required to control the glider to exit the spiral.

Switzerland reported that they had now experienced 5 fatalities over the last two years.
Their view is that this activity attracts people who like to take risks. To participate they must have
an FSVL licence and then a course with a qualified Speed Flying Instructor.

GERMANY It is not considered flying as it is limited to 30 metres agl.
It is regulated by a separate body :- The German Speed Gliding
Federation.
CZECH REPUBLIC It is not an activity here

SWITZERLAND A special licence is required. There are currently 450 licensed fliers
and their licensed instructors are tested every year. They are required to have avalanche knowledge.
It is done mostly on skis, and for foreign visitors a Swiss speed-flying
Instructor must be present.

ITALY It is recognised as paragliding. However it is still under consideration.

FRANCE It is controlled by the FFVL. A course for has been set up for instructors.
Before flying, contact must be made with a local Club or School.
Some manufacturers would like CEN to establish tests for these wings.

UK A development team has been established to see if and how this
activity can be incorporated into the BHPA.

It was suggested and agreed that pilots participating in organised competitions should only use
certified gliders.

It was also felt that the time had come to make dramatic changes to the sort of tasks being set.
It seems particularly dangerous that tasks are always based on how fast a pilot can fly his glider.

Also it was noted that the pilots themselves had too much influence in the whole structure
of Competition Flying. We know of no other sport where the competitors themselves are
almost entirely responsible for dictating the format of the competition.
While we understand the need for competitors to have a voice, the detail of the general format
should not solely lie with them.

It was agreed that the time had come that this Committee, with EHPU approval, write a formal
letter to CIVL informing them of our serious concerns.

The chairman thanked Miroslav and Petr for the kind hospitality of LAA CR in hosting the
meeting this year.
Next year’s meeting will be held in Cornizzolo in Italy on 3rd/4th July 2010.